In cooperation with the San Bernardino National Forest, we work annually to update an educational guide for OHV enthusiasts of every level to promote responsible recreation on the right trails when recreating in the Forest. Printing and distribution of the OHV guide is made possible by a collaborative partnership with Yamaha Motor Corp, USA, the U.S. Forest Service, and the OHMVR Division of CA State Parks.

You can pick up a copy of this map at your local Forest Service office or visitor center, or visit us at one of our mobile kiosks or trade show booths. Maps are given away for free, but your help can make sure we always have enough to go around. Please consider making a donation when receiving your own copy.

We also need the support of individuals or businesses interested in donating funds or printing resources to make future reprints possible.

What You Will Discover!

Welcome to the start of your own unique adventure in the San Bernardino National Forest! The Forest is home to an abundance of resources, and the perfect terrain for off-highway enthusiasts. Over 679,380 acres in size and with more than 900 miles of SUV/4×4 routes and a total of 226 miles of off-road routes, the Forest offers a variety of roads and trails for both advanced and beginner riders. Whether you are looking for the optimal challenge, or are a family who wants a relaxing day of sightseeing, there is something for everyone.

While you are here, we encourage you to take time to enjoy the multitude of resources. The Forest is a natural refuge for wildlife adapted to three unique ecosystems, from the desert floor up to alpine peaks. A plethora of wildlife call this place home: bears, mule deer, coyotes, fox, bald eagles, bats, rattlesnakes, and mountain lions, to name a few.

The San Bernardino Forest is famous for its bald eagles which can be seen perched in a tall tree or fishing at any of our beautiful lakes. These eagles are protected and when nesting. If you are interested in viewing the nest, scopes are often set up by naturalists at a safe distance for public viewing. Keep your eyes to the skies, as many are here year-round.

A common sight from the coast to the mountains, coyotes are adaptable to all kinds of ecosystems. Coyotes are omnivores and will eat almost anything. They weigh about 25 lbs., have a good sense of smell, and excellent vision. They will hunt alone for small prey, but will also form packs to take something larger. 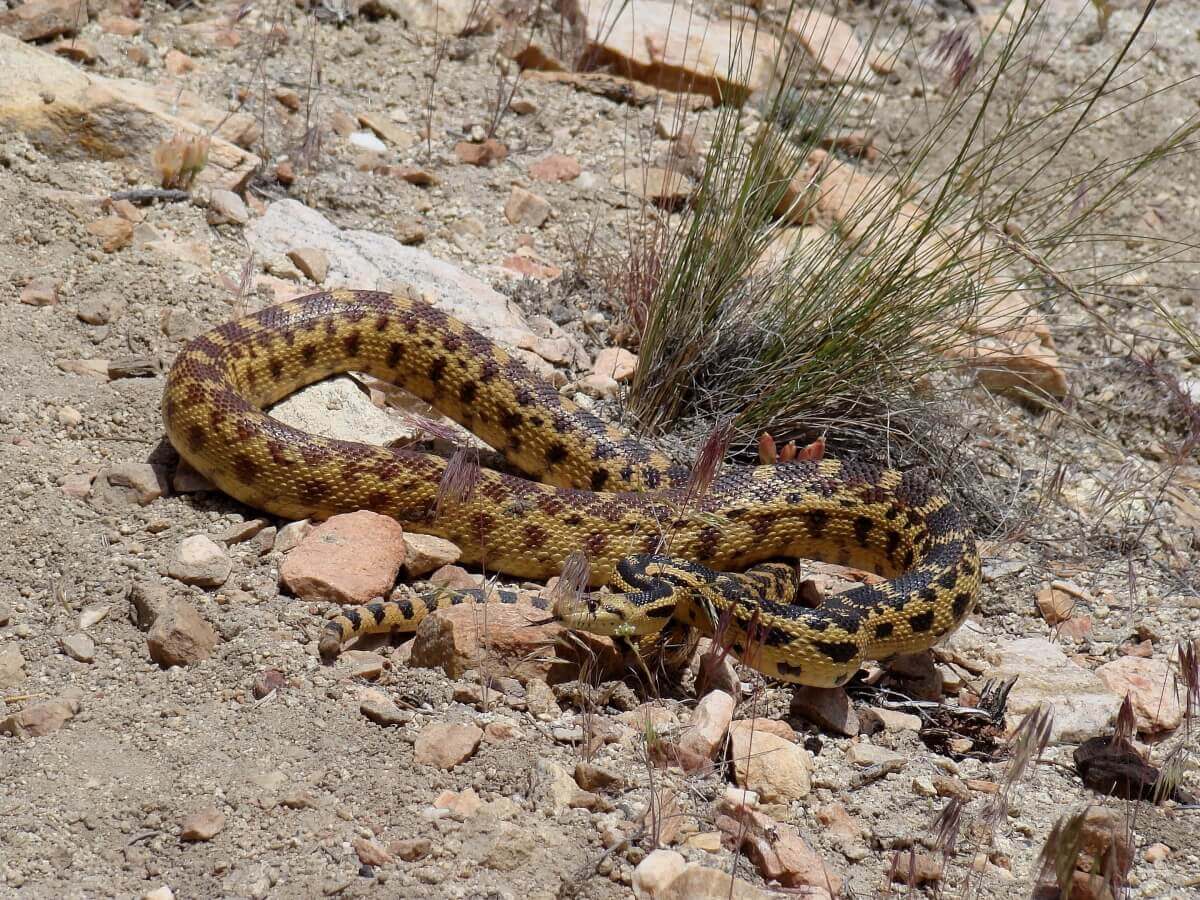 There are a variety of snakes to be seen including the California Kingsnake, Garter Snake, Gopher Snake, Mojave Green Rattlesnake, and the Southern Pacific Rattlesnake. Snakes are extremely important to the ecosystem. Snakes often regulate their body temperature by stretching out on a warm road or trail so try to avoid them and let them pass safely. Rattlesnakes are venomous and require extreme caution.

Generally kept well concealed in the terrain, they will occasionally be seen in the wild or in neighborhoods. The main diet of mountain lions is mule deer. 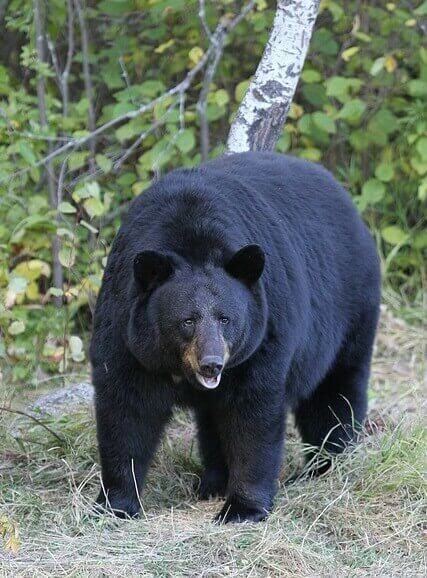 Black bears are opportunistic feeders, readily seeking out trash in campgrounds and neighborhoods. They vary in color from cinnamon to black. Adult males can weigh up to 200 lbs. and have remarkable physical strength. While their hearing and eyesight are better than a human’s, their best sense is that of smell, 7x the strength of a dog’s.

Mule Deer roam freely and you may spot one in the early morning or at dusk in a meadow. Mule deer are vegetarians, grazing on things like mountain mahogany, sagebrush, and grasses. They are also common prey for the mountain lion. Each spring, a buck’s antlers begin to grow again soon after they shed. 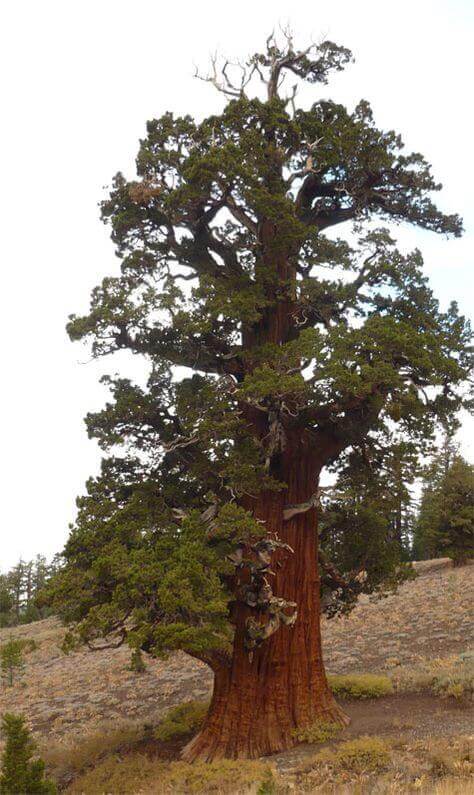 One of the forest favorites, the Western Juniper is known for its shaggy red bark and purple berries. The berries are used to produce gin and many species of wildlife, including birds, enjoy this abundant food source. 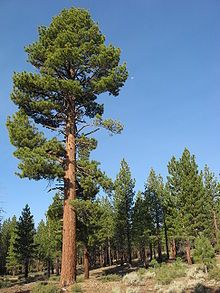 One of the most common coniferous trees in the forest, the Jeffrey Pine has needles in bundles of three and is commonly known as the “Gentle Jeffrey” for the non-prickly cones on its branches. The bark is famous for its butterscotch or vanilla smell. 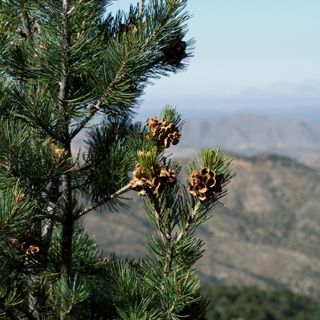 Pinyon Pine nuts were a staple of the Serrano Indians who settled in the San Bernardino National Forest. A good source of fats and calories, many wildlife species visit the trees to supplement their diet. 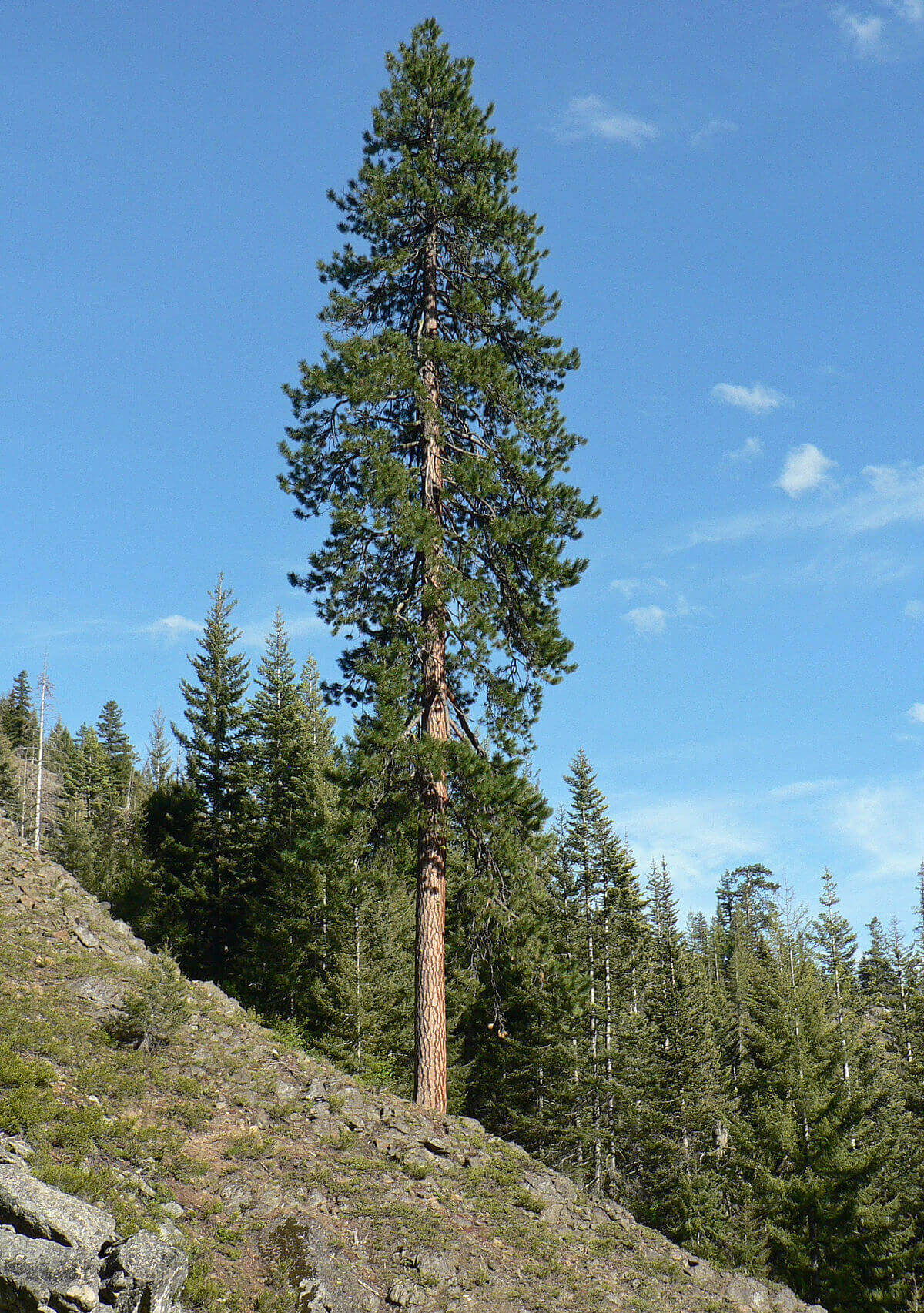 Another common conifer is the Ponderosa Pine. Similar in appearance to the Jeffrey, it has large plates of bark with black crevices. Known as the “Prickly Ponderosa” the cones can be distinguished by their sharp points. 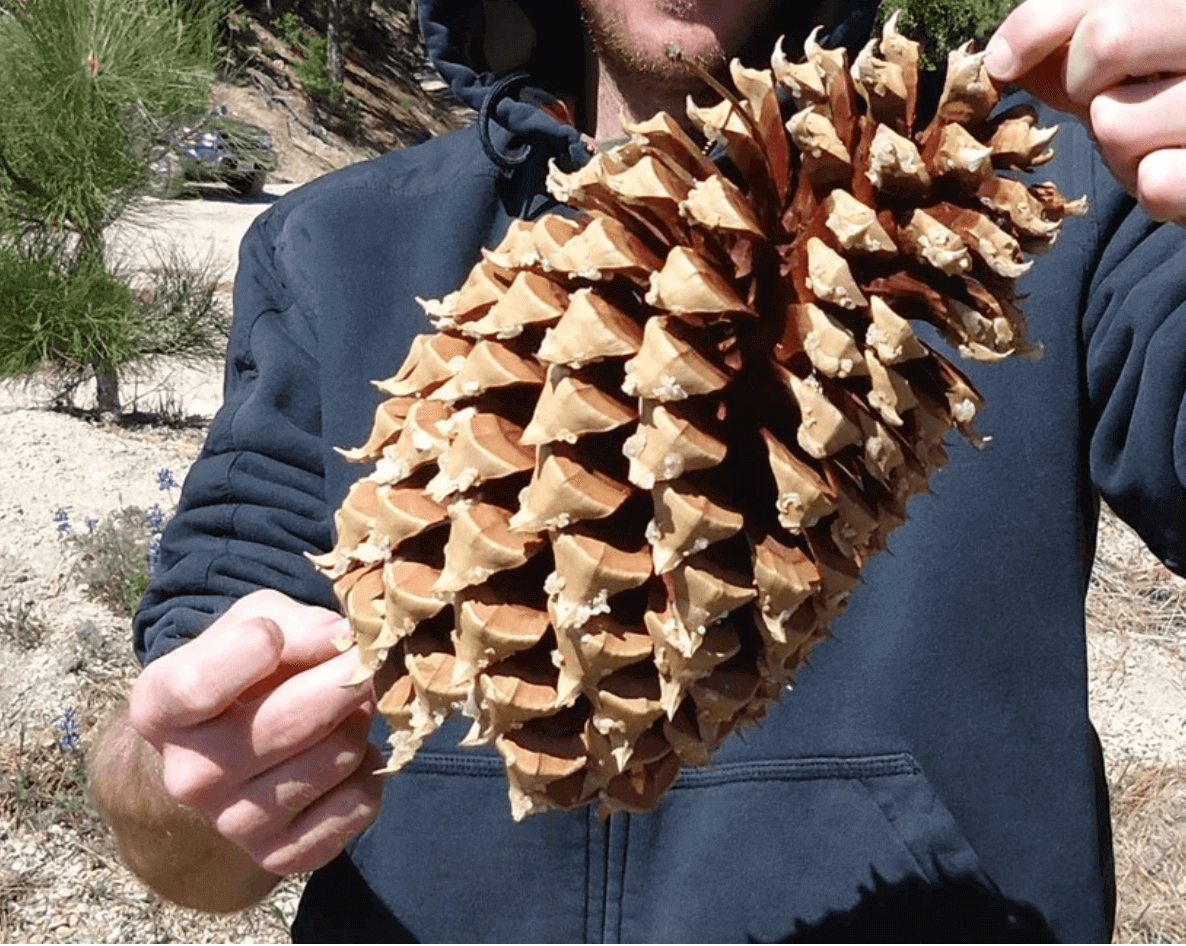 This tree has longer needles than the Jeffrey Pine and has the largest and heaviest cones in the forest. Coulter Pine cones can weigh up to 11lbs. and are sometimes referred to as “widowmakers”.

Not actually a tree, but a member of the agave family. This tall unique shrub is said to be named after the biblical figure, Joshua, whose arms were outstretched to guide pioneers towards the West. Joshua Trees, on average, have a lifespan of 150 years and blossom with white flowers in the Spring.

A type of prickly pear, this cactus is medium-sized and grows up to 15 inches tall, blooming with bright pink colored flowers in the spring to early summer. A single plant may consist of hundreds of fleshy, flattened pads. They are a blue-gray color and are typically spineless, but have many small barbed bristles, called glochids, that easily penetrate your skin. 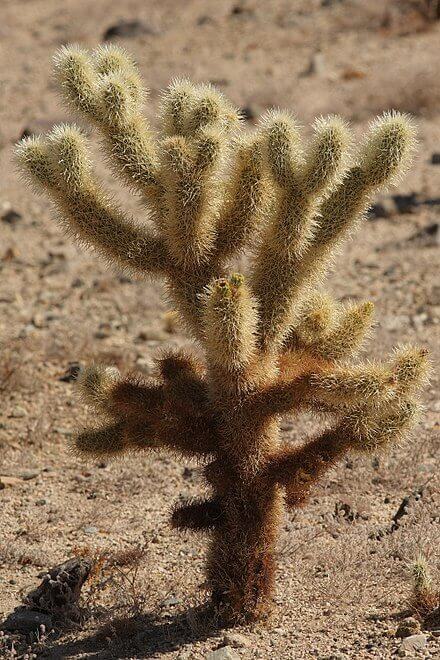 There are several species of cholla in the San Bernardino National Forest. Most have long cylindrical stems with barbed spines. Species generally bloom April-June with orange or greenish-yellow flowers. Chollas are unique due to the sheaths covering their spines, often giving the cactus a colorful appearance.

A common plant in the forest, the Rubber Rabbitbrush blooms with golden yellow flowers from August to October. Rabbitbrush was once considered as a possible source for rubber during World War II and used as a chewing gum for Native Americans, but its most important use is as an abundant food supply for wildlife.

While recreating in the San Bernardino National Forest, you will pass by a variety of sagebrush species. Sagebrush provides food and habitat for a variety of animals. The leaves are recognized by their pungent smell. This plant was notably used by Native Americans for smudging, a spiritual cleansing of a site. 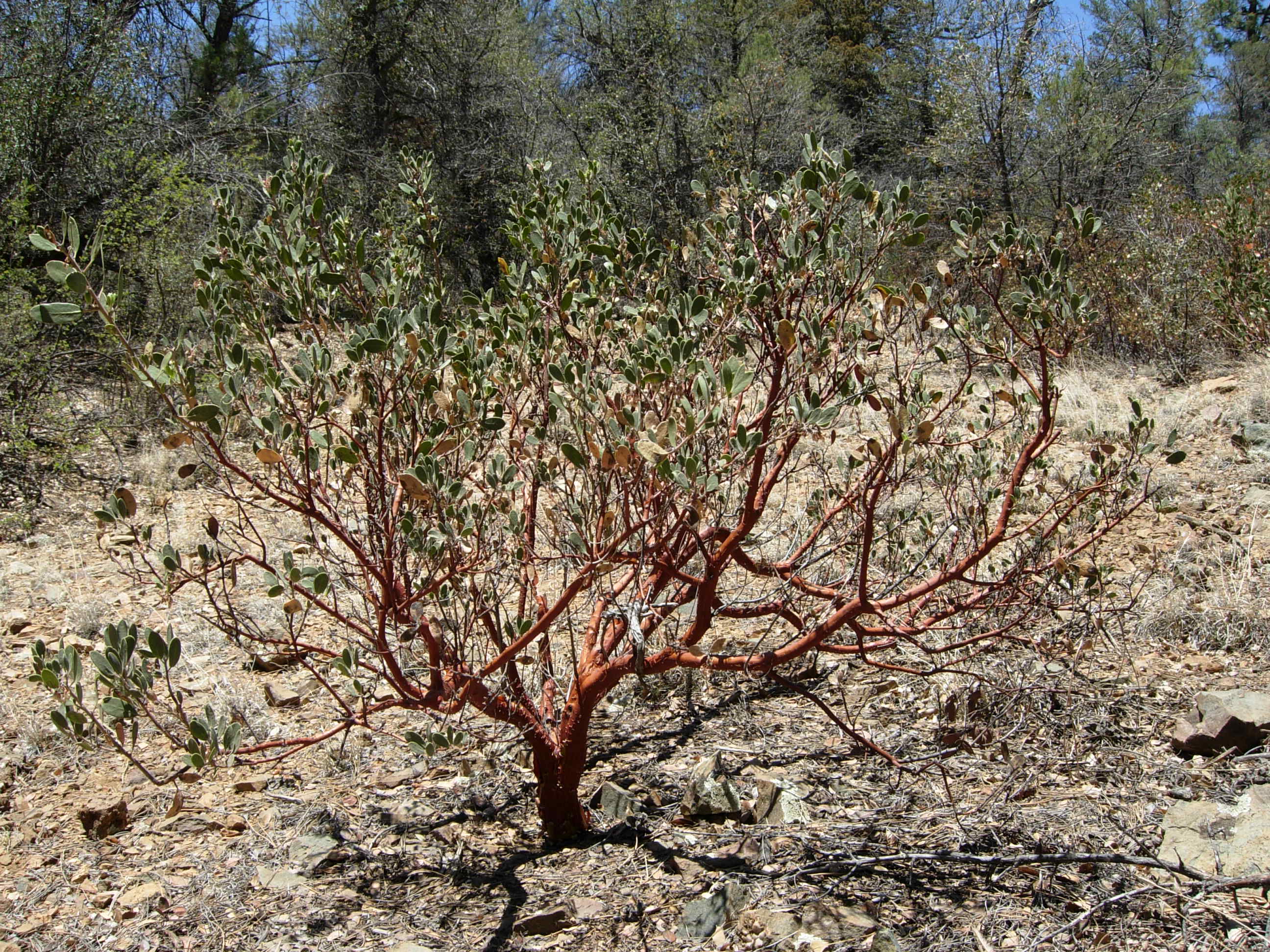 Manzanita means “little apple”, which reflects the small green/red berries on the plant. You can recognize manzanita by its hard and smooth orange/red bark and twisted branches. They are also drought tolerant. Native Americans used the chewed leaves as a treatment for wounds and stomach aches, while the berries were used as a food source.

The San Bernardino National Forest is home to many rare, sensitive and endangered plant and animal species. Using care to stay on designated roads and trails will help protect these important species and their habitats for future generations.

Cajon Pass is one of the most interesting geological and historical places in Southern California. Large sandstone rocks jut out of the hillside in a diagonal formation called the “Mormon Rocks.” The San Andreas Fault also passes near this part of the Cajon Pass where visitors can walk from the eastern margin of the Pacific Oceanic Plate to the western margin of the North American Continental Plate. Movement along the San Andreas system in this region created the San Gabriel and San Bernardino Mountain Ranges.

The San Bernardino National Forest was home to Native Americans for thousands of years before Europeans arrived. The Cahuilla lived in the desert areas around the San Jacintos and the Serrano traveled and camped in the San Bernardino Mountains. The Serrano moved from lower to upper elevations in the Spring when food was plentiful. While hiking in the forests, you may come across smooth holes worn in stones. These were metates, used by Serranos to grind grain and seeds into flours.

In 1855, gold was discovered in the San Bernardino Mountains and settlers moved to the mountains to try and strike it rich. In the Holcomb Valley, you will see old mines, tailings, and rusty trash from this era. Old cans and glass should not be removed as it is part of the archaeology of these sites. In 1907, the area became a designated national forest, bringing conservation to this beautiful land you see around you.

Be Safe & Be Responsible 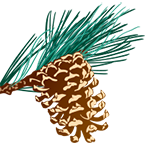 Pining For The Latest Updates?

Our email newsletter has up-to-date announcements and program information.

Sign Up
© Southern California Mountains Foundation 2023 - All Rights Reserved.
Back To Top